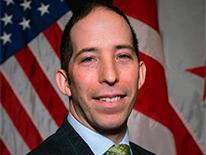 Prior to assuming the role of Chief Risk Officer in June of 2015, Jed Ross, Esq. rejoined the District of Columbia Government in January and began work with the DC Department of Human Resources as a Senior Advisor.  While with the Department of Human Resources, Mr. Ross advised and assisted the Mayor’s Office of Talent and Appointments with its recruitment and onboarding of Mayoral Appointees.

Before his work at the DCRA, Mr. Ross worked for the District of Columbia’s Office of the Attorney General (OAG) within the Commercial Division focusing on District of Columbia real estate matters.  While at the OAG, he worked extensively with agencies throughout the District government, and he has a vast understanding of the regulatory and administrative processes within which businesses and individuals must operate.

Mr. Ross earned his J.D. from the Syracuse University College of Law, and a B.S. in Marketing and Distribution Management from the Indiana University’s Kelly School of Business. He is admitted to practice law in both Maryland and Washington, DC.